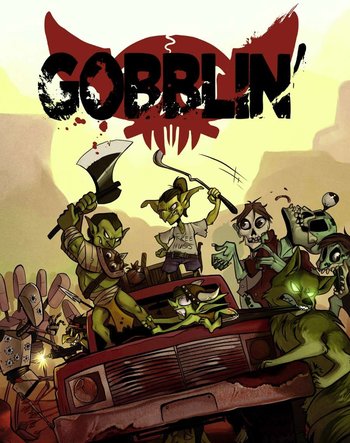 some caption text
''"The humans are gone! The goblins are here!
Now let's hurry up and take all their gear!''

Gobblin' is a Tabletop RPG published by Drunk and Ugly Games in 2018. It involves the fantasy world's population of goblins becoming so obnoxious, pathetic and cruel that both good and evil join forces for one massive spell to banish them to another dimension. This lands them in a post-apocalyptic version of Earth, and the goblin couldn't be happier. Their new realm (one they call Goblin House) is full of cars, guns, deliciously rotten food and things that blow up when you poke them enough times. The game focuses on goblins exploring and conquering a world where humanity is seemingly gone and nobody is there to stop them from doing anything stupid.

The game runs on an original system, mainly revolving around the d12.