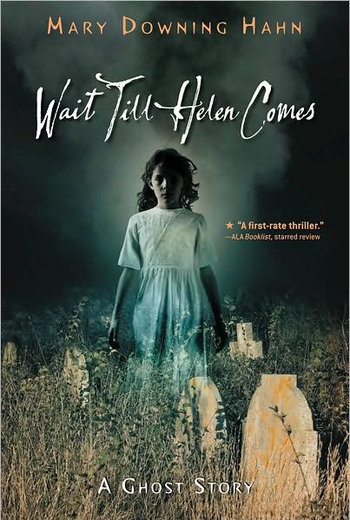 Wait Till Helen Comes is a 1986 children's novel by author Mary Downing Hahn.

After their mother Jean marries Dave, twelve-year-old Molly and her younger brother Michael find themselves stuck in the country for the summer with their new whiny, tattling, manipulative and malicious seven-year-old stepsister Heather. When she was only three, Heather witnessed the death of her mother in a house fire. Now jealous of the attention her father pays to his new wife and her children, Heather constantly schemes to make it looks as if the older children bully her. Molly and Michael are frustrated that their own mother always takes Heather's word over theirs.

But behind their new home is a graveyard where Heather soon spends all of her time. There she finds an abandoned grave belonging to a child the same age as she, bearing her own initials. Heather boasts that she's made a new friend, Helen, who understands her and will do anything she asks. Heather withdraws further from the family in favor of her new "friend," even as a string of destructive, inexplicable events begin.

In spite of her resentment toward Heather, Molly comes to fear that her new stepsister might be in terrible danger. Because over the past hundred years, Helen's had lots and lots of friends...all of whom ended up at the bottom of the local pond.

The book was adapted into a Lifetime Movie of the Week (alternately titled Little Girl's Secret) in 2016. The author herself appears in a cameo as the helpful town librarian.