Recap / Avatar: The Last Airbender "The Cave of Two Lovers" 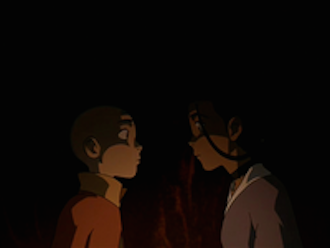 Shrouded in darkness, Aang and Katara share a kiss as they try to find their way out of the tunnel.
"Love is brightest in the dark."
Advertisement:

In order to slip through Fire-Nation-controlled territory and reach Omashu, our heroes join with a group of wandering nomad hippies to take a dangerous pass under the mountains. This pass has a seemingly innocuous name, the Cave of Two Lovers, but as ancient legends say death awaits all that go in there, and that the tunnel paths constantly shift.

The advent of badger-moles (the actual source of the shifting paths) splits the Gaang down the middle: Katara and Aang become separated from the others. While Sokka attempts to use his intellect to find a way out (and escape the hippies, whose mellow harshes him the heck out), Katara and Aang wonder why the legends claim that "love will light the way". After all, it's not like two of them like each other or anything. Nope, nothing of the sort...