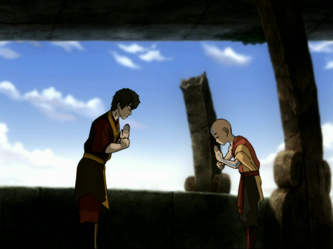 Zuko finally joins the Gaang, providing Aang with a firebending teacher.
"WHY AM I SO BAD AT BEING GOOD?!?"
— Zuko
Advertisement:

After the devastating failure of the invasion, the gang and their remaining allies need a place to shelter, so Aang takes them to the only safe haven he can think of; The Western Air Temple. They know they have to re-group and think up a new plan for defeating the Fire Nation, but Aang doesn't seem to want to talk strategies: after another failure, he finds himself trying to escape his responsibilities. The fact that he still needs to practice Earthbending and begin learning Firebending also hits him full in the face, especially considering that there's no one to teach him.

Good thing that Zuko's finally had his Heel–Face Turn and is willing to help him, right? Wrong—the Gaang are none too eager to trust him (especially not Katara), and the runaway prince must convince them otherwise.