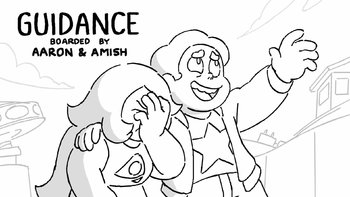 The episode begins with Amethyst and Steven at Fish Stew Pizza. Steven notices Bixbite working behind the counter by chopping toppings and cutting a pizza into equal slices. Amethyst reveals that she has been pairing Gems from Little Homeschool with Beach City jobs, including some Rubies that enter with Mayor Nanefua acting as her bodyguards.

Steven and Amethyst go to Beach City Funland, where he sees that many of the Quartzes are now working there. Amethyst shows him that Nephrite is skywriting with Andy's plane and that Larimar and Snowflake Obsidian have found ice-related jobs on the boardwalk. Steven gets concerned because many of the jobs now held by the Gems are very similar to the jobs they originally held on Homeworld. Amethyst reassures him that this is not the case, only for Nanefua's Ruby guards to walk by and exclaim happily that their jobs are just like what they used to do on Homeworld. Despite Amethyst explaining that these are the jobs the Gems wanted, Steven says that the Gems only think they want to do the jobs and that he must get them out of their comfort zones. He speaks with Larimar and Snowflake Obsidian, who are running a snow-cone stand together. When asked, Snowflake and Larimar both reveal they had ice-related jobs on Homeworld. To "fix" this, Steven tries to get Snowflake to fly with Andy in his airplane, though she is clearly unsure. He then places Larimar in charge of The Appalachian, which she is excited about, as she claims that human screams are her "favorite of the Earth's delights".

After randomly pairing up Gems with different jobs, Steven goes to relax at Fish Stew Pizza. The star iris begins to close in on Steven as he exclaims that he's excited to see how everyone is going to learn and grow outside of their comfort zones, only for it to stop and reverse once Steven gets hit in the face with pizza thrown by Zebra Jasper. More pizzas are delivered violently, knocking over bystanders. Steven goes outside to find Beach City in chaos. After seeing the disaster caused by Gems with unfitting jobs, he finds Amethyst at the Funland Arcade and apologizes to her for not trusting her Gem-mentorship program, asking for her help to "unhelp" everyone he "helped". She accepts his apology and leaves the arcade to assist him.

They fuse into Smoky Quartz to stop Snowflake Obsidian, who is about to crash the airplane she is flying. They are able to set her and Andy down on the ground, apologizing and asking if they are okay. The two nod their heads, still traumatized. Smoky then heads to Funland, where Larimar has lost control of the Appalachian. Steven and Amethyst argue through Smoky Quartz, distressed that they won't make it in time, until Smoky turns pink, giving them the ability of super speed while also slowing down time. With this, they easily save the roller coaster passengers. Just as they prepare to stop the roller coaster from crashing, their powers go back to normal and it flies off the track and into the ocean. Smoky then accepts that while saving people from crashing on a roller coaster, the roller coaster's still gonna crash in the end.

Later on, they are talking at the beach, and Amethyst says she feels like she has finally found her place in the world in helping other Gems do the same for themselves. She then asks Steven what he wants to do for his future. Steven explains he still desires to help others but feels he's losing his touch. Larimar then walks up, holding a stuffed bear behind her back, and gives it to Steven as thanks for giving her a job at Funland. She tells him that she discovered she is not great at operating a roller coaster, but that she is good at handing out prizes to children. She states that she loves their laughter, which is "just like screaming" (to which Steven is visibly disturbed). They then see the crashed roller coaster floating by, with Onion still in one of the cars. Steven is at first worried but then calms down, knowing that Onion will be fine.

In a desperate situation, Steven's hidden powers, carry over to Smokey Quartz, drastically increasing their speed, so it seems that everyone's going in slow motion. Using this new ability, they manage to save all the people, though not the roller coaster.

In a desperate situation, Steven's hidden powers, carry over to Smokey Quartz, drastically increasing their speed, so it seems that everyone's going in slow motion. Using this new ability, they manage to save all the people, though not the roller coaster.