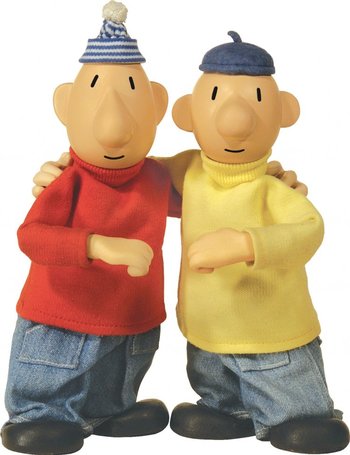 What is it, old sport?

Look what I got us! A brand new TV Tropes page! Just needs a little assembly...

Let's get to it, then. Have you seen my wrench, dear friend?

Not since we've used it to pry the fish from the drinks machine, I haven't.

Oh, pity. How do we open the crate then?

Goodness me, you wanted to open it with a wrench? We've got a perfectly good carjack!

We interrupt the show, since any more self-demonstration would be injurious to the servers. Pat and Mat are two lovably bumbling Czech guys, made of plasticine, which might be for the best, considering the amount of falling on their heads that inevitably occurs to them in the course of boldly improving their living conditions. Their efforts are always hilariously misapplied: if Pat and Mat are trying to make a fish tank, you'd better have your wellingtons on hand.

Pat and Mat have been messing about with these tropes: