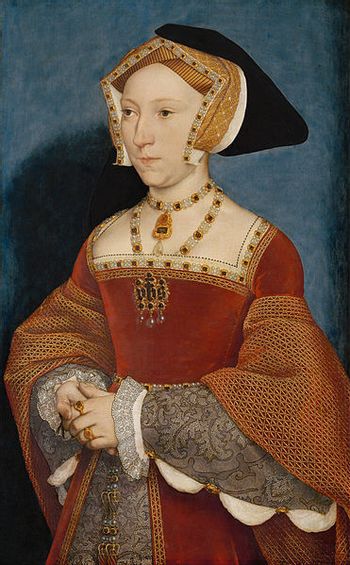 "Bound to Obey and Serve."
Advertisement:

Jane Seymour (c. 1508 – 24 October 1537) was Queen of England from 1536 to 1537 as the third, and with hindsight, most beloved wife of Henry VIII. Since she gave birth to Henry's only male heir, she kept her importance even after her death as the ancestress of a line of future kingsnote The most famous example of this is a posthumous family portrait, where Henry, Edward, and Jane sit under the cloth of estate while Mary and Elizabeth each stand about three feet away. Since her son Edward never reached his majority or had children, this sense of her importance waned after Edward's death.

Of all the queens of Henry VIII, she had the most humble origins, being a member of the upper gentry whose family (unlike that of Catherine Parr, the other gentry queen) did not enjoy any particular status at court, though her father had been knighted by her eventual father-in-law Henry VII for helping to put down a Cornish rebellion. Like all of Henry's queens, she shared with her husband a descent from Edward I. In fact, she was a direct descendant of Edward III, but through an almost exclusively female linenote which, to be fair, went back to Philippa of Clarence, through whom the House of York had derived their claim to the English throne, making her quite far removed from the major power players in English politics at the time of her birth.

Often portrayed as docile and uninteresting, she definitely had her own political goals. Sympathizing with Catherine of Aragon and her daughter Mary, she was a quiet enemy of Anne Boleyn. When she attracted his ardour in 1535, she felt little remorse and used the same protestations of chastity and honor that Anne had used on him once. She married Henry only a few days after her predecessor's death and immediately started working for the reinstatement of Mary in the line of succession.

As a traditionalist, she also pleaded with Henry to preserve the monasteries, for which he terrified her by reminding her of Anne's fate. This was all unimportant when she found herself pregnant. After giving birth to her son, she attended festivities, but fell sick soon after. Much lamented by Henry, she died of puerperal fever. When he died in 1547, he was buried next to her.

Not to be confused with the actress best known for her roles in the James Bond film Live and Let Die and the TV series Dr. Quinn, Medicine Woman, though she, born Joyce Frankenberg, did take this Jane's name for her stage name. For her, see Jane Seymour (Actress).

Tropes associated with Jane Seymour as portrayed in fiction and in popular culture:

Portrayals of Jane Seymour in fiction: