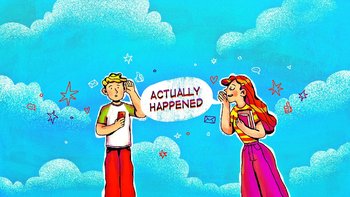 ACTUALLY HAPPENED is a YouTube "story time" channel. It features stories featuring teenage protagonists telling of extraordinary things that have happened to them.

The videos are reportedly real stories; however, it's near universally agreed that most are heavily fictionalized if not outright fake, often due to the videos having extremely implausible or nonsensical things happen within them. Many are sensational and oftentimes the titles and/or thumbnails can be inaccurate. On June 8th, 2020 all of the videos on their channel have been made private, possibly because of said accusations and ridicule from other creators on the platform.

Compare to My Story Animated.