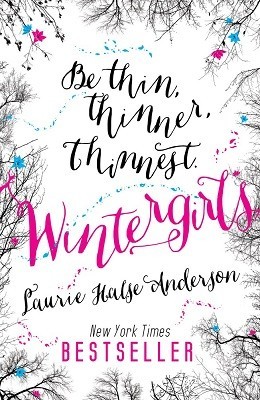 "Who wants to recover? It took me years to get that tiny. I wasn't sick; I was strong."
"I failed eating, failed drinking, failed not cutting myself into shreds. Failed friendship. Failed sisterhood and daughterhood. Failed mirrors and scales and phone calls. Good thing I'm stable."
Advertisement:

Wintergirls is a 2009 fiction novel by Laurie Halse Anderson. It follows Lia Overbrook, a long-term sufferer of anorexia and self-harm, who indulges more and more in these unhealthy addictions after hearing that her estranged (and equally troubled) best friend, Cassie, died alone in a local hotel... the very same night Lia ignored her calls for help. 33 of her calls for help. Falling deeper and deeper into despair, and convinced she's being haunted by Cassie's ghost, Lia must balance her compulsive need to starve and cut her body with the never-ending struggle to keep her family ignorant of just how sick she really is.

Wintergirls went on to earn both critical acclaim and controversy. Best known for its intimate, graphic take on extremely sensitive issues, the book is at times abstract and at times gruesome, and does not shy away from the ugly and destructive effects of its subject material.

For all that, and much to the author's dismay, the book is held up in certain circles as the pro-anorexia bible, its self-destructive and deeply disturbed protagonist an inspiration rather than a warning.