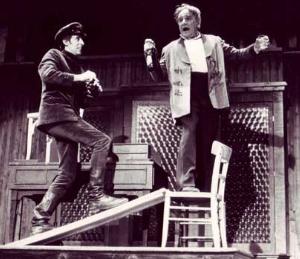 "I’ve got a good heart, and I am glad for it. I once saved a stag beetle from getting run over, it’s almost excessive. I let it crawl up on a stick."
— Mr Puntila, Act I

Mr Puntila and His Man Matti (Herr Puntila und sein Knecht Matti) is a 1940 play by Bertolt Brecht, based on The Sawdust Princess by Hella Wuolijoki.

Estate owner Johannes of Puntila lives his life in a permanent drunken stupor, picking fights and asking women on the street to marry him. His daughter, Eva, is engaged to a very proper and exceedingly dull young attaché. One day, Puntila finds himself at a bar where he meets Matti Altonen, a Servile Snarker driver whom he hired a few days before — though he doesn't remember doing so.

As they travel through Finland together and prepare for Eva's wedding day, Puntila increasingly confides in Matti and tells him his secret: three or four times a year, he sobers up by accident and becomes afflicted by responsibility, which scares him straight back into alcoholism.

Matti, ever stoic, spends his days throughout the play ignoring Puntila and playing seduction games with the young Eva. Bored, decadent and hungry for scandal, the Puntila family rapidly collapses in on itself, until Matti finally decides to simply get out... without a letter of reference, stating he'll just take his chance with the world.

Using the stock characters of the Commedia dell'Arte, Brecht hoped to showcase the self-sufficient and positive "modern man" in Matti, and to parody the decadence of capitalism and fascism with the character of Puntila. The play was first performed in 1948 and has become one of Bertolt Brecht's most succesful works. Modern performances tend to include some amount of nudity and sexual action — depending on the production, either between Matti and Eva or between a long-suffering Matti and a very drunk Puntila. (Or both.)

Tropes in Mr Puntila and His Man Matti: