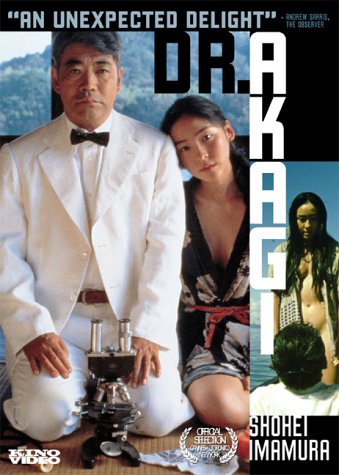 Doctor Akagi (original title: カンゾー先生) is a movie directed by Shohei Imamura and released in 1998. Set in a Japanese town in the last days of World War II, it tells the story of an oddball country doctor whose obsession is to stem the hepatitis epidemic raging among his patients, which earns him the nickname "Kanzo Sensei", i.e. Doctor Liver. Unable to get help from the authorities, who are fanatically focused on fighting the war to the bitter end, he assembles a small group of misfits: an alcoholic and lecherous Buddhist monk, a surgeon with a morphine habit, an escaped Dutch POW hiding in his cellar, the madam of the local pleasure house, and a young prostitute with a crush on him.

Those outcasts, Imamura suggests, with their quixotic quests and idiosyncratic traits, are ultimately saner than the legitimate authorities; they haven't exchanged compassion for blind obedience.

The movie isn't so much plot-driven (though there is a plot progression of sorts) as impressionistic, painting a multilayered picture of a dedicated individual who, like Confucius's definition of the gentleman, "is ignored of the world without feeling bitterness"; a small group of people bound together by mutual trust, appreciation and more than a little lust; and a community that tries to get on with life in the midst of warmongering madness.

Not related to Doctor Ritsuko Akagi or Akagi.