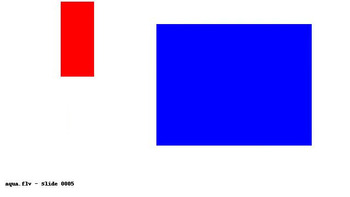 Webdriver Torso is a YouTube slideshow series of blue and red rectangles on a white background, with random tones playing as music. That's about it, besides for a few videos that break away from the formula.

Initially the origin of the channel was unknown, leading people to speculate it may be part of an Alternate Reality Game, among other theories, but Google eventually revealed they created the channel in 2013 to test the quality of YouTube's video compression algorithm.