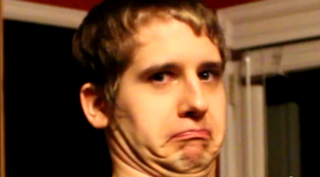 Sorry ladies, he’s not available.
”If you have any issue with what I have said or done, please feel free to write your government officials and they will get around to my punishment at their nearest convenience.” –Seamus being himself
Advertisement:

Who says you can't make a living by playing video games?

(YouTube name SSoHPKC) is a YouTube video game player known in the gaming community for the massive amounts of uploading he does. He will often fall just short of uploading one dozen videos per day and even has a program which does the uploading for him should he be unable to meet his usual amount by his own hand. The norm for him is to play recently released titles, though he occasionally goes back to an old favorite or will play older games of a series if a new title is to be released in the near future. And as always, he plays Super Mario Bros. ROM hacks, the very thing which launched Seamus into super stardom among the Let's Play community.

Known primarily for his sarcastic nature, Seamus is a proud Irishman with a love for alcohol and has even uploaded videos of himself playing while drunk. A pale, scrawny boy in his 20's, Seamus will often play games and make videos with the largest example being the dozens of Minecraft videos featuring various co-op partners.

Originally, playing video games and uploading them to YouTube was just a hobby. Seamus worked at Target and took some college courses while playing games on the side. Deciding there had to be a better way to live than his current situation was allowing, he ended his time in college and quit his job, citing numerous issues with his work place (He has no problems with Target in general, just that one store) which ranged from poor management to bad experiences with customers. Once he reached a high level of popularity on his YouTube channel, he was offered a deal by Machinima.

His play style is very action-oriented. If Seamus has the option to shoot his way through the bad guys or sneak around them, he will ignore the stealth option nearly every time. Puzzles tend to be a sore subject with Seamus as he has expressed numerous times that he is not a huge fan of puzzles, even saying the puzzle-heavy section of Darksiders was so bad that it caused him to not play the game for a few days. That being said, Seamus has completed both Portal and Portal 2 due to high demand for them to be played. While he does do sidequests and download DLC for various games, he is not a 100% completion type.

Seamus pays attention to what his fans say and will reference comments made in videos on occasion, even negative one. Comments he finds stupid might have a chance of being the focus of a Troll video where Seamus takes the comment's contents (usually a complaint about his playing style) and exaggerates what he was doing which caused the complaining. He has organized these videos into a playlist which can be found here

A full list of the games he has played is available on his channel because it is far too long to be listed here.

Tropes seen in his work include: