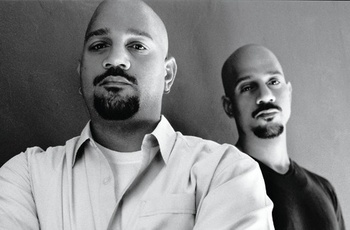 Albert and Allen Hughes (born March 1, 1972 in Detroit) are two African-American directors and twin brothers who co-direct their films.

They began their career with the acclaimed hood film Menace II Society. Their most recent foray was The Book of Eli, and each made their own solo directing gig with Broken City for Albert and Alpha (2018) for Allen.

Not to be confused with John Hughes.