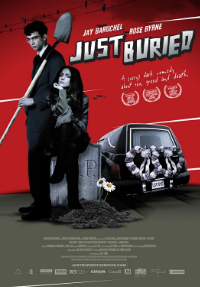 Just Buried is a 2007 Canadian film written and directed by Chaz Thorne. It stars Jay Baruchel and Rose Byrne.

When Oliver Whynacht (Baruchel) inherits his estranged father's funeral home, he discovers it is almost bankrupt. After a night of drinking with Roberta Knickel (Rose Byrne), he kills a local man with his truck. Roberta, who is both the local coroner and funeral home embalmer, helps Oliver stage the body so that it appears like an accident. However, when suspicion is raised that the death may not be accidental, Oliver and Roberta realize that they have to kill again. This need to hide their first crime and to keep the funeral home in business, find Oliver and Roberta falling in love and participating in a series of "accidental" deaths.