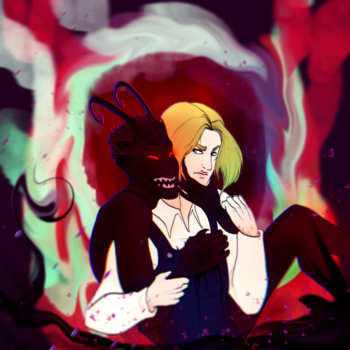 The Hundred Companions is a High Fantasy series by Ari, following the adventures of a mercenary company of the same name. It is based on a D&D campaign the author was in, which was run by fellow writer D.M. Kiely.

The story begins with the company's departure from the coastal city of Wellspring, after their failed attempt to protect the local governor from an ancient, deadly assassin. Down one employer, the Hundred Companion's contract is soon picked up by one Spirit Eater. And so begins an adventure involving death, love, "reliable" merchants who may or may not be dragons and one snarky demon trapped in an ancient sword.

The story can be read at the author's Tumblr.

The Hundred Companions provides examples of: