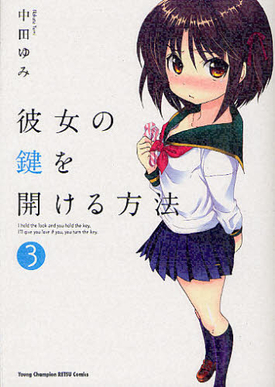 A series by Yumi Nakata, with her typical focus on underwear. Or rather, not wearing underwear.

Haruma's first impression of Chitose would be striped panties. Running into her in the hallway, Chitose's panties greet Haruma before they even know each other.

Immediately, Haruma finds himself attracted to this mysterious striped pantied girl, only to discover that she is transferring into his class AND she is going to be the housekeeper at the apartment complex his Grandfather owns — due in no small part to his grandfather buying up her debt (leaving her in indentured servitude to the apartment complex until she pays it off).

Thus starts Haruma and Chitose's growing relationship, which is hampered only slightly by the fact that Chitose is a raging exhibitionist, barely able to keep her panties on for any significant length of time. Er, what?