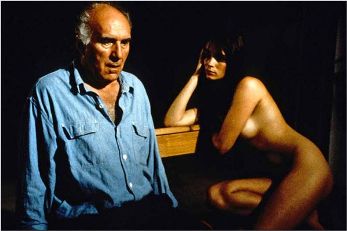 "La Belle Noiseuse" is the best film I have ever seen about the physical creation of art, and about the painful bond between an artist and his muse.
—Roger Ebert
Advertisement:

La Belle Noiseuse (the title translates loosely as "The Beautiful Troublemaker") is a film by Jacques Rivette, loosely based on a story by Balzac, The Unfinished Masterpiece. Starring Emmanuelle Béart, Michel Piccoli and Jane Birkin, it was released in 1991.

Nicolas, a young artist, visits in the company of his girlfriend Marianne (Béart) a famous painter, Frenhofer (Piccoli), who has for the last several years been living as a recluse with his wife in their old house in Provence. Frenhofer no longer paints, and among his unfinished works is a portrait of a nude woman, "La Belle Noiseuse", for which he had used his wife (Birkin) as a model.

At the urging of his agent, Frenhofer agrees to resume his work on the nude portrait. Nicolas, in Marianne's absence, decides to "lease" his girlfriend to the painter so she can be his new model. Incensed that the deal took place without her consent, Marianne nonetheless agrees to pose in the nude for Frenhofer. Inspired by her youth and beauty, the painter starts over with a new version of "La Belle Noiseuse" with a vengeance.

A shorter, different version was released in 1993 for TV under the title La Belle Noiseuse: Divertimento; Rivette used the same footage but re-edited it, so that the story is told from the point of view of the artist's wife.