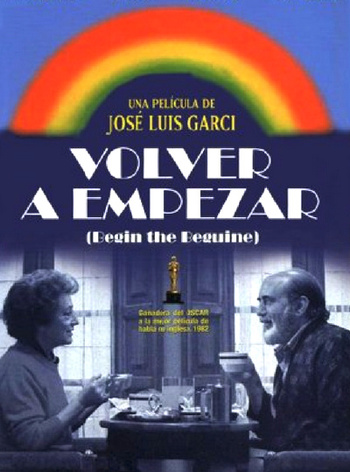 Begin the Beguine ("Volver a empezar", which actually translates to "Start Over") is a 1982 film from Spain directed by Jose Luis Garci.

Antonio Albajara is a famous writer and man of letters. He is a Spaniard, but he was an opponent of The Franco Regime so he fled Spain in 1938, and wound up spending some forty years writing and teaching in the United States. Generalissimo Francisco Franco died in 1975 and in 1981 he is still dead, so after receiving the Nobel Prize in literature in Switzerland, Antonio returns to Spain. He arrives at his old hometown, the sea port of Gijón, and looks up an old school friend from his youth, as well as his old girlfriend Elena. Antonio has a secret, which he shared with his school friend but not with Elena: he is dying of cancer.