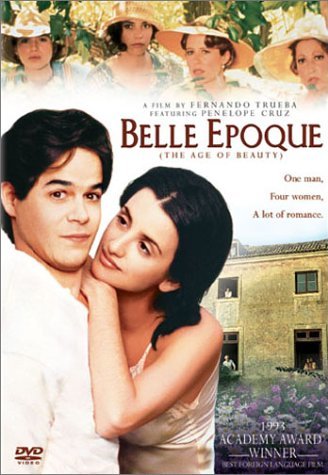 Belle Époque is a 1992 film from Spain directed by Fernando Trueba.

It is not actually set during "La Belle Époque" or The Gay '90s, terms usually applied to the later 19th century or the period between the Franco-Prussian War and the First World War, 1871-1914. Instead it is set in February 1931, in a Spain roiled by the political unrest that eventually led to the overthrow of the monarchy and the establishment of the Second Spanish Republic

in April of that year.

Fernando is a young soldier of Republican leanings who has deserted. Wandering across the country by foot, he eventually finds himself at the rural homestead of an artist named Manolo. Manolo has four, count 'em, four extremely good-looking daughters: Clara, a widow; Violeta, a lesbian; Rocio, a curvaceous temptress who is marrying into a royalist family for security; and the youngest, good-hearted Luz (Penélope Cruz in her second film). All four of Manolo's daughters find themselves attracted to handsome, friendly, Fernando, and he to them. Fernando eventually has sex with each daughter in turn, but who will he wind up with? Or will he wind up with any of them?