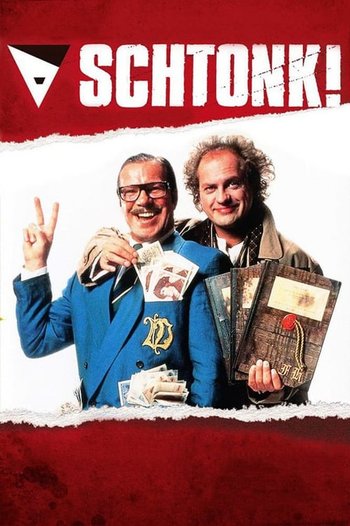 Schtonk! is a 1992 film from Germany directed by Helmut Dietl.

It is a satirical, partially fictionalized take on the infamous Real Life Hitler Diaries

scandal. The film opens with Fritz Knobel as a boy in post-war Berlin, passing off random trinkets (like an officer's hat) as Adolf Hitler's personal possessions, and selling them to gullible American soldiers. Fast-forward some thirty-odd years and Fritz (played by Uwe Ochsenknecht) bills himself as a professor and art historian, but he's actually a forger. He paints a nude of a lovely village lass named Martha (Veronica Ferres) and passes it off as a portrait of Eva Braun by Hitler. Fritz thinks he's screwed when the Nazi Nobleman he sells the painting to calls in an art expert, but when the art expert proclaims it genuine, Fritz learns a lesson on how experts can be fooled. In the meantime, Fritz is carrying on an affair with curvaceous Martha, much to the fury of his wife Biggi (Dagmar Manzel).

Enter journalist Hermann Willié (Götz George), a crackpot, Nazi aficionado, and all-around creep, the sort of guy who would raise Hermann Goering's yacht from the bottom of a harbor and restore it. (If that isn't creepy enough, Willié is also dating Hermann Goering's niece.) When Fritz goes to a meeting of rich Nazi weirdos and offers up a fake Adolf Hitler diary for sale, Willié is hooked. Soon Fritz finds himself frantically cranking out volume after volume of crudely faked diaries, while trying to manage his complicated love life. Willié for his part shows the diaries to his magazine, which seizes on them a find of enormous historical importance.