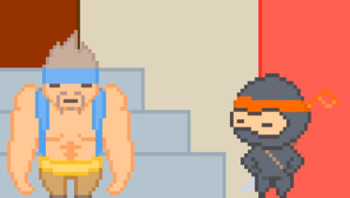 The Burrito Bushido (left) and the ninja in episode 8: "Duncan Vs Rythian".
A pixel art Web Animation series starring Sips and Sjin of the Yogscast and animated by Balbod.
Advertisement:

In Feudal Japan, a Ninja has a contract to kill the eating contest winner, the Burrito Bushido, who is marked for assassination, and keeps failing. Meanwhile, in the Future… as two spacemen activate a quantum dilation device, the Burrito Bushido and the ninja are sent forward in time two hundred years to a "cruel dystopia, ruled by this sea lying dyon", by which point the deadline for the ninja's contract will have presumably expired.

After throwing a two hundred years out-of-date burrito at "Shark Boy", Shark Boy challenges Bushido to fight in the upcoming Jade Dragon Martial Arts World Tournament, threatening him with another contract on him if he doesn't show up.

. Appears to have concluded as of episode 13.