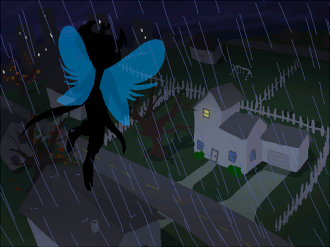 is a MS Paint Adventures

fan comic written by TheNeonWerewolf. Set shortly after Homestuck ends, the kids have successfully beaten Sburb and created a new universe, and are free to live out the rest of their lives in peace - until one day, Vriska Serket shows up at John's doorstep. Suddenly, the kids have to deal with all kinds of new and unknown threats, including a pair of incompetent government spies dedicated to hunting down aliens like Vriska and a mysterious teleporting ninja whose body count is growing bigger every day.

The first forum thread could originally be found here

, and the final (and only surviving) thread can be found here

A Wiki can be found here

Not to be confused with the other works named Nightfall.