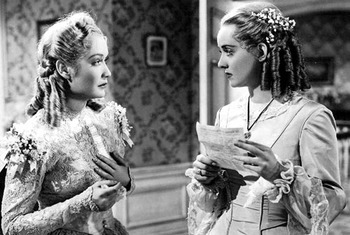 The Old Maid is a 1935 play by Zoë Akins, based on a novella by Edith Wharton.

It is set in the American South between the years 1833 and 1854. Delia and Charlotte Lovell are cousins, society princesses of wealth. On the day of Delia's wedding her caddish old boyfriend Clem has the poor timing to show up in town after two years away. Delia, panicked, sends Charlotte off to intercept Clem at the train station. Naturally, the demands of melodrama result in Clem impregnating Charlotte that night. Charlotte keeps her pregnancy a secret, delivers a daughter, Tina, and houses Tina with another family. Years pass, and Charlotte becomes engaged to Delia's brother-in-law Joseph—but a selfish, scheming Delia decides to obstruct the relationship.

Made into a 1939 film directed by Edmund Goulding, starring Bette Davis as Charlotte and Miriam Hopkins as Delia.