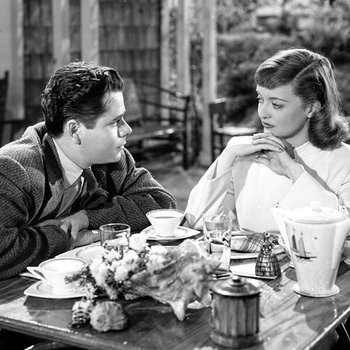 A Stolen Life is a 1946 Melodrama directed by Curtis Bernhardt, starring Bette Davis and Glenn Ford.

Kate Bosworth (Davis) is a shy Tomboy who falls for lighthouse maintenance worker, Bill Emerson (Ford). Although Kate is very much in love, her shy demeanour plays against her. But nothing is worse to highlight her deficiencies than her twin sister Pat (Davis in a Dual Role) who’s all confidence and sex appeal.

Subsequent meetings with the sisters show Bill the differences, and he falls for Pat instead. Heartbroken, Kate immerses herself in her painting, thinking she’d never be with Bill again. But she soon finds out that Pat and Bill’s relationship is not what it seems when she gains the opportunity to be Pat.