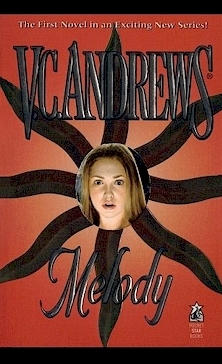 Melody Logan knew her beautiful mother, Haille, was unhappy in their hardscrabble mining town.... note Cover of the first US edition, by Brigid Pearson and Lisa Falkenstern
Advertisement:

The Logan series is a series of novels published under the name of V. C. Andrews, but written entirely by the ghostwriter who had previously written sequels to several of Andrews's novels.

The first three novels feature Melody Logan. The fourth is a prequel featuring her cousin Laura, a Posthumous Character in the first book. The fifth book is another prequel featuring Melody's great-aunt Olivia.

Alternative Title(s): Music In The Night