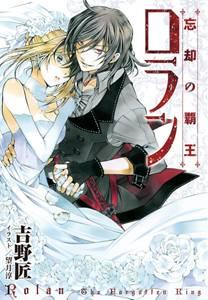 Rolan The Forgotten King is a 2010 manga by Takumi Yoshino.

During the Clauven Empire, seven-year-old Princess Étoile du Clauven was kidnapped by an assassin but was rescued by a guard—Rolan Flameberge. Ten years later, the world of Avalon is torn in conflict between two countries—the Clauven Empire and the Commercial City Union. With the Clauven Empire fighting a losing war, the Commericial City Union's leader, Commander Amenti, had a proposal to end the conflict: his marriage to Étoile. Étoile wants nothing to do with Amenti and pleads with Rolan to save her from her fate. Étoile's wedding day approaches, Rolan crashes the wedding and rescues her. As mysteries surround Amenti and the Union, Rolan and Étoile try to stop Amenti and the war.