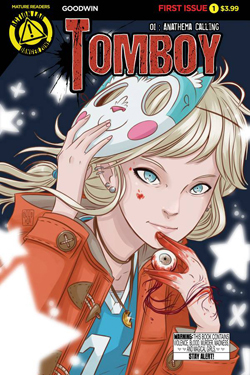 Addison Brody has a good life. She goes to a private school in the city, is on her school's field hockey team, has a boyfriend -sorry, best friend- she loves, and can talk about her favorite Magical Girl anime, Candy Castle, with her best friend. All of this changes when she discovers that she no longer has a boyfriend: He was murdered, his body unceremoniously dumped in the river, and his father murdered at home. By a twist of fate, she comes across the men who carried out the act on the subway and bludgeons them to death with her hockey stick.

While she does make it home without being seen or caught by any cameras, things will not end there for Addison. There's a greater conspiracy surrounding Nick Vivaldi's death. His father was a police officer and was investigating the practices of Irene Trent, the head of a powerful drug manufacturer. All the while, Addison is starting to suffer from vibrant hallucinations of Nick's ghost and Princess Cheery Cherry - the protagonist of Candy Castle, who encourage her to seek revenge.

Not to be confused with the obscure 1950s Superheroine Tomboy.