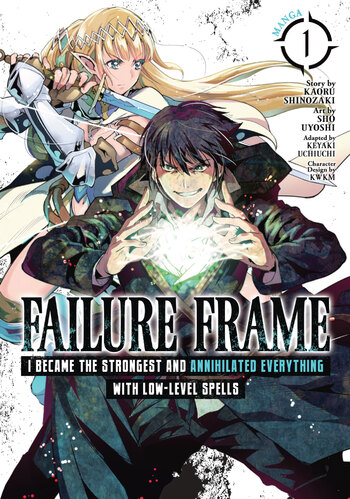 Behold our heroes out to get revenge on a certain goddess, and maybe save the world while they're at it.note Left: Seras Ashlein, Right: Mimori Touka
Advertisement:

After spending most of his early childhood being abused by his parents before they abandoned him, Mimori Touka tries to spend his high school years in the background.

However, when his entire class is summoned to another world during a school trip by the goddess Vicius, Touka has the worst stats of the class, marking him an "E-rank" hero, with most of his classmates receiving S and A ranks, the goddess without hesitation banished him to "Ruins of Disposal" to die.

But Touka would not just lie down and die. After finding out that his unique skill set, the "Abnormal State Skills" has more potential than everyone imagined, the abandoned hero sets out find a way home and make Vicius pay for what she did.

Failure Frame: I Became the Strongest and Annihilated Everything With Low-Level Spells note JP title: 'Hazure Waku no Joutai Ijou Skill de Saikyou ni Natta Ore ga Subete wo Juurin Suru made'; translation: 'I Became the Strongest with the Failure Frame [Abnormal State Skill] as I Devastated Everything', ) is a Light Novel series written by Kaoru Shinozaki. It was adapted into a Manga by Uyoshi Shou and Uchiuchi Keyaki. The light novel and manga have been licensed by Seven Seas Entertainment.

No relation to the Fatal Frame series.

Compares to series like Arifureta: From Commonplace to World's Strongest, Garbage Brave, I'm The Only One With Unfavorable Skills, Isekai Summoning Rebellion, Nito's Lazy Foreign World Syndrome, and Suterareta Yuusha No Eiyuutan where a group of students are isekai'd to another world and the main character is ostracized for his weak skills before being betrayed.