Recap / Star Trek: The Next Generation S5E21 "The Perfect Mate" 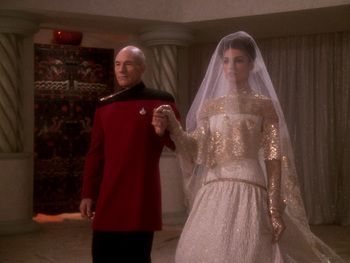 No, not a still from the X-Men Wedding Issue.
Advertisement:

The warring planets of Krios and Valt Minor, once two halves of one civilization, have finally decided to bury the hatchet and reunite. The Enterprise is to serve as the site for the historic peace treaty signing and reunification ceremony. Kriosian Ambassador Briam boards the ship along with a good bit of cargo, among them a strange glowing egg-like thing. Not too long after, the Enterprise takes on two unexpected guests, a pair of Ferengi rescued from a damaged shuttlecraft.

The two Ferengi don't waste any time making nuisances of themselves; one ambushes Briam just to annoy him and Picard while the other one pokes around the Kriosian cargo. He manages to break open the big egg, and the cargo inside awakens: it's a beautiful young Kriosian woman named Kamala, and she was meant to be in suspended animation until the ceremony began. Oops.

Briam explains the situation to Picard and Company. Kamala is an "empathic metamorph," a naturally-occurring, albeit rare, mutation from the Kriosian genetic norm. Metamorphs have the ability to sense the emotional needs of a potential mate and change themselves to suit those needs. She was intended to be a gift to the Valtese Chancellor Alrik as a token of good faith. It seems the original rift between Krios and Valt was caused by a metamorph so many centuries ago—two brothers fighting over a girl—and the gift of a metamorph is a symbolic gesture to heal the rift.

Picard and Beverly Crusher have a lively debate over the ethics of this arrangement. Beverly is furious, calling the arrangement little more than slavery. Picard hides behind the Prime Directive: this is how an alien culture does things, and a massive civil war hangs in the balance. Besides, Kamala is a mature, intelligent person who knows what she's getting into, so they really don't have any ground to stand on.

Unfortunately things are a little more complicated than that: Kamala is at a very delicate stage in her development, which is why she was kept in stasis. For a metamorph, sexual maturity means emotionally imprinting on a single mate, pair-bonding permanently with them (this was meant to be Alrik). A side-effect of this is that Kamala is awash with pheromones right now, driving any man who comes near her wild with desire. This includes Riker, Worf, and the group of rowdy space miners that have taken over Ten Forward. Realizing the seriousness of this situation, Picard assigns Kamala a chaperone: Data, the one man aboard the Enterprise immune to her charms.

The situation, however, soon escalates: the Ferengi offer to buy Kamala from Briam, but when he refuses, the argument turns physical, and Briam winds up in a coma—leaving Picard with no choice but to take over administering the ceremony himself, with Kamala guiding him through the nuances of Kriosian culture. Working together so closely means trouble, of course. Picard struggles to maintain his Stoic façade and diplomatic detachment while becoming genuinely attracted to Kamala. Kamala, meanwhile, finds herself fascinated by Picard, mainly because he's probably the first man ever to treat her like a person and not a living sex toy.

The day of the ceremony arrives, and Chancellor Alrik meets with the crew. Alrik, it turns out, is a humorless bureaucrat who's more interested in finalizing the details of the treaty than he is in the reunification ceremony. He views the ceremony, including his marriage to Kamala, as a tired formality. He has no interest in her as a person; she's just part of the peace offering. Picard is troubled by this, but then Kamala drops the big one: she has reached sexual maturity, and she has pair-bonded. With Picard.

Not to worry, though. Kamala retains her empathic abilities. She'll still be able to sense Alrik's needs and meet them. He'll never know that she hasn't really bonded with him. Picard tries to stop the whole thing, but she refuses to let him. You see, one of Picard's most attractive qualities to her was his sense of duty and willingness to sacrifice for others. It's what she learned from him as part of the bonding, and it's why she can't back out of the ceremony now. The peace is more important than their happiness.

The ceremony is finished, the peace treaty is finalized, and Ambassador Briam makes a full recovery. Everyone is happy. Well... almost everyone.

Tropes found in "The Perfect Mate" include: