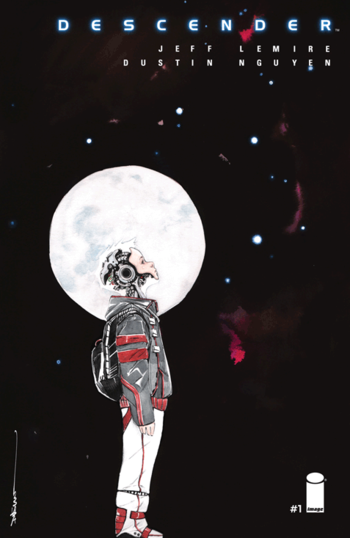 Descender is a Space Opera comic book about a young boy robot, Tim-21, who awakens from ten years of sleep mode to find a galaxy vastly changed. Enormous robots appeared over several key planets one day, making no communications before unleashing devastating attacks. In a day, billions were killed and the UGC (United Galactic Council), a species-spanning government body, was left weakened. Violence and strife rose up and as one, organics turned against robots, leading to vast cullings driven by fear.

No one knows where the giant robots, given the name Harvesters came from. But as a small UGC group discovers, Tim-21 just might hold the key to finding out. Various factions collide to find, control, or kill Tim, just as many wish to use the threat of the Harvesters to gain powers themselves. What follows is a story that is by turns heart-warming, heart-breaking, thrilling, frightening, and humorous as Tim-21 struggles to find a sense of meaning and make a life for himself in a galaxy that has decided robots are undeserving of both. Written by Jeff Lemire and illustrated by Dustin Nguyen, Descender's first issue was published in 2015 by Image Comics.

After a thirty two issue run, a direct sequel, Ascender, was announced in the final pages of Descender's conclusion.

Descender has examples of: