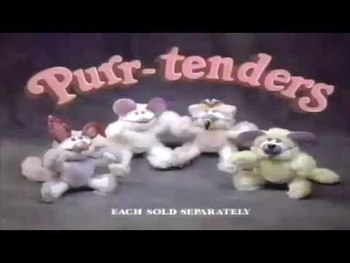 A line of plushies created by Hallmark and Fisher-Price in the 80s, the Purr-tenders were a bunch of brightly colored cats wearing little masks and a very odd Backstory. At the Pick-A-Dilly Pet Shop, all the customers want to buy unusual, 'exotic' pets... 'exotic' pets like birds, bunnies, mice and dogs. But nobody ever wants to buy a cat, and the kitty pens are getting rather crowded...

So some of the kitties hatch a cunning plan: they make masks and ear-bands out of felt and disguise themselves as other animals, and start hanging around the other animals' pens, trying to pass themselves off as the real thing. Amazingly, this works, and soon they've all ended up in happy homes, still keeping up the charade.

...However... when they feel happy and content, they start purring. So that exposes them, while the flimsy disguises apparently hold up otherwise. Thankfully, the kids who learn their secret have already fallen in love with their new pets, so they let them keep lying and pretending to be other animals rather than getting them to accept that they're fine the way they are.

They also had an enemy in Ed-grr, the shop owner's grumpy guard dog who enjoyed mocking them about how nobody wanted them because they weren't special or exotic. Ed-grr hated how their crazy plan worked, and wanted to recapture them and drag them back to Pick-A-Dilly just so he could torment them more.

Despite Hallmark's efforts, the series never gained enough steam to earn itself a cartoon series and compete with its predecessors and peers, the Pound Puppies. There was a Burger King tie-in with a few toys, including some odd doll-stocking hybrids called 'Sock-Ems', and a handful of books telling their story, but beyond that there wasn't much beyond the strange backstory and the dolls' ability to purr that made them stand out.

These toys provide examples of: