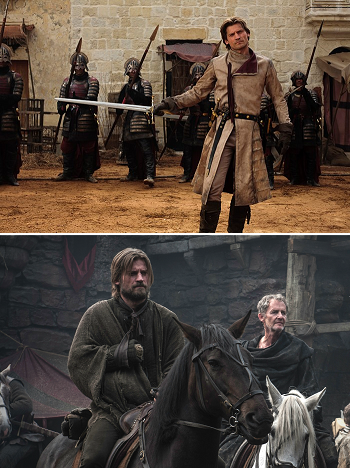 Jaime Lannister, member of the Kingsguard and the greatest swordsman in all Westeros. And pictured above, Jaime Lannister before he became a war prisoner and lost his sword-hand.
"When pride comes, then comes disgrace, but with humility comes wisdom."
— Proverbs 11:2, The Bible (NIV)
Advertisement:

In fiction, it's dangerous to carry one's head too high. What kind of character is used for this story varies; it can be anyone from a Jerkass to a Corrupt Corporate Executive. Extra points if the character has not only a high opinion of themselves but also a low opinion of everyone else.

But unfortunately for them, they are usually so busy kissing their mirror they don't see that the plot has a very special treat in stock for them that will thoroughly teach them the error of their ways right before our eyes.

The "breakings" usually involve misfortunes increasing in unpleasantness, Mind Rape, killing everyone they love, And I Must Scream, disease, Cold-Blooded Torture, horrible accidents, and so on; the character will fail in the field they pride themselves on, lose all admirers or their power, and they alone will be responsible for their problems. Also, they might get pummeled into the ground or verbally torn apart by a "The Reason You Suck" Speech, anything that knocks them off their high horse. No matter how, they either end up bitter and alone or having to depend on others - either way, eating a good fat slice of Humble Pie. This trope evokes either sympathy or schadenfreude from the public; the high-and-mighty may learn the Aesop or not, but the public gets to learn it either way.

Which is a rather old idea: The Ancient Greeks considered Hubris (overbearing pride) to be one of the greatest and most self-destructive sins. Thus, there are quite a number of stories about how those guilty of it are punished, either by circumstances or by the gods (although circumstances are generally also considered caused by the gods). The Greeks even had a god specifically for the punishment of hubris, the goddess Nemesis. Or, as Brick Top put it, "Do you know what 'nemesis' means? A righteous infliction of retribution manifested by an appropriate agent..." The Greeks loved poetic justice; the proud were always brought down by something... appropriate.

See Pride Before a Fall for a fall that happens at once right at the beginning; Ineffectual Loner and Insufferable Genius for characters who are much at risk of getting this plot line for them; Fallen Princess for a heroine whom The Call itself punishes with a drop in status; Small Name, Big Ego for a character whose overinflated self-image will be shattered; and Royal Brats for characters whom the audience will be begging to see broken. If the setting is High School, the Alpha Bitch and the Jerk Jock will be the victims of such a plot.

Compare Sudden Humility, which may or may not affect a haughty character.

Often seen in a Slobs Versus Snobs conflict or a Backstory. If the Hubris is society-wide, see Look on My Works, Ye Mighty, and Despair! and And Man Grew Proud. A harsh instance of this trope can result in Redemption Equals Affliction. It can also go hand in hand with a Rash Promise storyline, where characters often think their promise can't possibly have negative consequences and find out the opposite.

If this is the protagonist's main character development, it's a Jerk-to-Nice-Guy Plot.