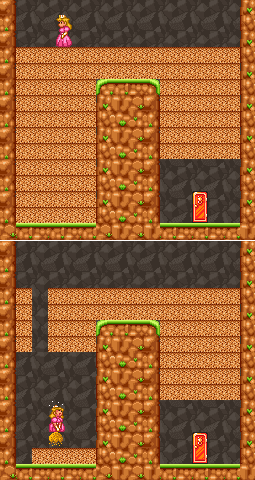 Talk about digging your own grave...
"No matter how low your expectations of the users are, they will always find new ways to disappoint you."
— Developer proverb

And then there's this.

This situation is for when you can render your game Unwinnable by doing something utterly dumb, or something no sane player would attempt in any conceivable gameplay.

This trope overlaps both with Unwinnable by Mistake and Unwinnable by Design. Usually it is the testers' job to think of the craziest possible decisions a player might make, and make sure the game still works properly. On the other hand, designers may decide they simply cannot prevent unwinnable situations from occurring altogether, and leave them in the game, reasoning that the player deserves such an outcome if they do something so obviously suicidal.

Other times, it's a reasonable oversight. When the fruits of a few dozen programmers gets into the hands of thousands or even millions of players, odds are a number of them are going to be far more creatively insane than anyone could realistically account for. See Developers' Foresight for examples of where they actually do, though.

In many genres, it's nearly impossible to avoid it. For example, in a First-Person Shooter, the player can fire away all the ammunition, enter a fight with a health bar at nearly zero, and save. In a strategy game, one can stay still, not gathering or building anything, and when the enemy attacks with overwhelming force, save. Basically, in almost any game that allows you to save at any time, you can save just before (and sometimes just after) a death, when it's too late to do anything about it. The latter case can occasionally overlap with Unwinnable by Mistake in a game with quicksaves, if you hit quicksave when you meant to hit quickload and have no other saves; autosaves can lead to a similar situation, although you usually need to be playing the game in a slightly-insane manner for it to happen.

Subtrope of Who Would Be Stupid Enough? - the answer is any player who attempts this. Compare Earn Your Bad Ending.