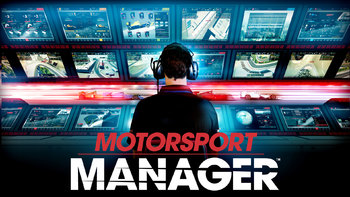 "It's the final few seconds before the lights go out..."
Motorsport Manager is to Formula One and other professional motorsports what Football Manager is to football. Developed by Playsport Games and published by Seganote who, incidentally, also published Football Manager, Motorsport Manager tasks you with running your own motorsport team in one of several categories. It's up to you to hire and fire personnel, develop new parts, upgrade your HQ, plan out race strategies, and balance the books, all while keeping your chairman and your drivers happy.
Advertisement:

Initially released on mobile platforms in 2014, an enhanced version was later released for PC and Mac in November 2016, with three updates and challenge pack DLCs, released in February, June, and November 2017. A Nintendo Switch port based on the third mobile game was released in March 2019, published by Curve Digital. This page covers the PC/Mac version.