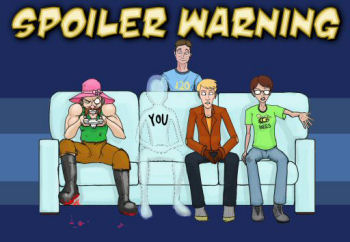 The Spoiler Warning crew. From the left: Josh/Reginald Cuftbert, You, Shamus, Rutskarn and Mumbles.
Josh: Ok, so next episode... Hopefully there will be less rage-filled discussions about how much Bethesda deserves to die in a fiery pit.
Rutskarn: I don't know, why change the formula now?
Shamus: I know; we've got a good thing going here. The worst thing they could do is put out a good game now: They'd put us right out of business.
— Spoiler Warning: Let's Play Fallout 3 (Episode 20)
Advertisement:

Note: This entry has nothing to do with actual Spoilers. If you were looking for that kind of Spoiler, check out the Handling Spoilers page.

is a DVD Commentary-style Let's Play group, whose main style consists of deconstructing, analyzing and (in some cases) ruthlessly mocking the plots and characters of the games they play, usually while using a play-style designed to showcase pieces of the game in ways that 'normal' players usually won't see (i.e. by playing the game like it was a tabletop role-playing session and they are The Loonie). They tend to favour Role-Playing Games and the video game equivalents of Oscar Bait.

The group (in order of appearance) consists of:

The team also occasionally hold specials in-between seasons, to celebrate holidays, or because one of the cast is missing for the week and the rest don't want to continue without them.

They also host a weekly Spin-Off podcast, The Diecast

, where they discuss news of games, technology, films, whatever else catches their interest and (in theory) answer mailbag questions sent by fans.

If you wish to support them, they have a Patreon account here

. All money will go to Josh, as he edits all the footage together and will soon likely have to upgrade his software.

The LPs provide examples of: