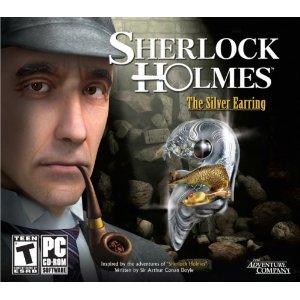 It's October 1897, and Holmes and Watson are attending a gala party thrown in honor of Lavinia Bromsby, the daughter of the wealthy Sir Melvyn Bromsby, at which they're supposed to investigate the questionable character of an Italian opera singer. Instead, everything gets thrown for a loop when the host winds up murdered — and the guest of honor is the number-one suspect. It's up to Holmes and Watson to find out who really killed Sir Melvyn. They have four days in which to solve the crime and save Lavinia from a trial at which the circumstantial evidence will surely seal her fate.

The course of the investigation leads them to discover that things are very strange within Bromsby's company. What really happened when they built that bridge in India? How is the whole situation connected with a company of traveling actors? Did Lavinia really kill her father? What about Hermann Grimble, Bromsby's right-hand man — how's he mixed up in all this? Holmes is able to solve the matter, of course. Can you?

Solving the mystery involves all manner of clue-hunting. You need to interview witnesses, collect and review documents, perform experiments with Holmes's own chemistry lab, and correctly answer quiz-style questions at the end of each day. In addition, there are a few more difficult scenes in which you have to successfully sneak past guards or reach a goal in time. Toss in a few Red Herrings and characters who aren't entirely what they appear, and you have a rich and engrossing mystery worthy of its famous star.

In 2010 the game was re-released for play on mobile phones.