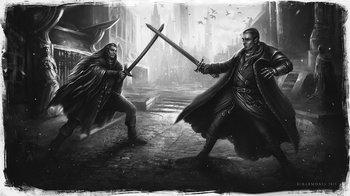 Anargrin vs a nameless vampire from Hamar Noir

For over 2500 years the continent of Angara has been dominated by an oppressive, regressive theocracy which follows the teachings of 'Jaroai.' Whose avatar united the tribes of humanity and taught them magic, then led them in conquering then enslaving the elves and dwarves. Until in one day it all changed, the country of Valandri, ironically the cradle of mankind, was covered by a thick, black cloud and all of its people were transformed, transformed into creatures which were later labelled vampires. The vampires of Valandri rebelled, they rejected the religion of Jaroai.

A religion which was created by the Jaroai, strange eldritch abominations which reside in a sub-dimension, using said religion to manipulate humanity for their own ends. Ends which are still a mystery.

That was in the year two thousand AHV (After Holy Victory) For five hundred years Valandri has waged war, both open and in secret with the rest of Angara, using their agents, the magically enhanced super spies, the Hunters. Who masquerade as mercenaries dedicated to hunt down vampires who had given into their thirst and slaughter innocents.

The Angaran Chronicles is a series of short stories which mostly follows the Hunters, mostly the elf Hunter Anargrin and his black ops team of the elite of the elite as they perform their morally questionable missions all over the continent.

The stories published online so far are...

The 1st novel is now up for pre-order due for release on the 1st of November 2021!

The magically enhanced super-assassin, Anargrin and his team are the elite of the elite, black operations sent on the most dangerous of assignments to undermine the authoritarian theocratic regimes of the continent of Angara. Anargrin believes the past should be remembered, never obsessed over. Still, when he and his band of misfits are sent to investigate a Hunter Coven that stopped all communication soon, evidence indicates Anargrin’s enemy’s involvement. An enemy that is responsible directly and indirectly for much of Anargrin’s traumatic past, evidence that reveals a conspiracy hidden within the slave trade.

A conspiracy that threatens to engulf the entire continent in blood.

After the destruction of her village, the only survivor: Emilia is saved by a stranger: an elf named Anargrin. Who claims to work for a mercenary organisation known and respected all over the continent of Angara: The Hunters. He asks for no payment and to help her with the sickness that threatens to overwhelm her.

After defeating a vampire, the intense, ruthless Hunter Jelcine comes across a strange little girl...

After coming back from a dangerous mission which left his friend and partner, the werewolf: Emilia in a coma. Anargrin is sent on another mission: to hunt down a rogue vampire. A rogue vampire with no consistent modus operandi and who is exceedingly good at hiding its tracks. So much so even the veteran Anargrin is forced into desperate speculation.

But worst of all: drive him into desperate measures.

Measures which drives Anargrin to wonder; do the ends, truly justify the means?

The Hunter, Arken is hired by an aristocrat to investigate into a town under his rule. A town which has cut off all communication with the outside world. What he finds is beyond his worst imaginings. What he finds, implies something beyond mortal comprehension. Was longlisted for the 2018 Wattys.

Alathis is just a day away from taking part in the Ritual. A Ritual which is required so he can become one of the magically enhanced super assassins, a Hunter.

The Ritual which only one in five survives.

But before he can he needs to work through his tremulous and traumatic past.

A past which would've driven anyone else insane or broken them beyond repair.

Will he become one of the One in five?

Since she was young, Raleas looked up to her father and was in contempt of her mother. And dreamed and obsessively practised to become a sniper.

But then her mother died and now Raleas is beginning to reevaluate everything she stands for.

The short stories can be read for free here and are updated every Monday.

The novel will be published on amazon.com when it's ready.