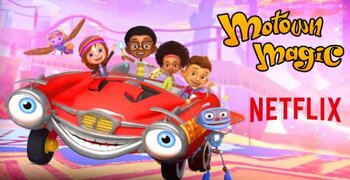 Motown Magic is a 2018 Preschool Show from Netflix. It came out November 20, 2018.
Advertisement:

The series focuses on Ben, an eight year old African American boy with a big heart and amazing imagination. Using a magic paintbrush, he transforms his city by bringing various street art to life, as well as classical sounds of Motown.

It has not been renewed past its second season, which released June 28, 2019.