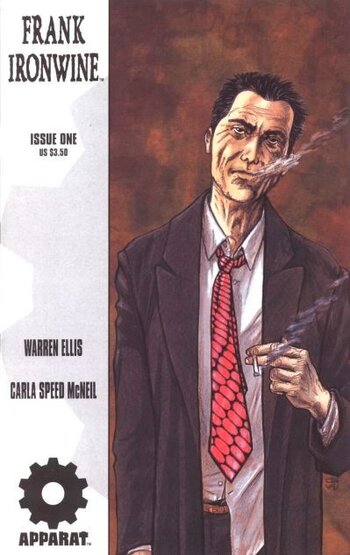 The cover to Frank Ironwine.
This is what I think adventure comics would look like today if you blanked out the last sixty years of superhero comics. Yes, there would still be elements of great strangeness, because that's what the pulps traded on. There would be sf and high adventure and weird thrillers and occult journeys. But they would be of their time. The term "adventure" itself would have a dozen different definitions.
— Warren Ellis
Advertisement:

One day, Warren Ellis up and decided to create an imaginary line of comics and write four single issues of each four imaginary comics, each from a different pulp genre.

Ellis also uses Apparat as an imprint for other one-shot comics, such as Crécy, Aetheric Mechanics, and Frankenstein's Womb.