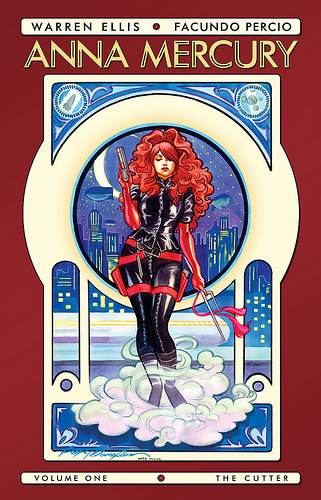 Trouble is brewing in New Ataraxia. An underground rebellion is striking back against the technocratic fascist government, helped by the mysterious figure of Anna Mercury. The government is getting ready to fire their newest weapon, the Cutter, at their neighbor Sheol City and Anna has only hours to stop it.

But there is something more about Anna. How does she seem to escape impossible situations so easily? How can she jump out of windows and land harmlessly on the ground or walk across telephone wires? How can she so unerringly fire her twin pistols? And she comes from someplace no one has ever heard, beyond New Ataraxia and Sheol City. Someplace called London.

A genre-bending series written by Warren Ellis and illustrated by Facundo Percio, Anna Mercury is part sci-fi, part pulp fiction, and part spy thriller (with just a dash of superhero thrown in). Originally a 5-issue mini-series (March-December, 2008). A second mini-series appeared in 2009-2010.