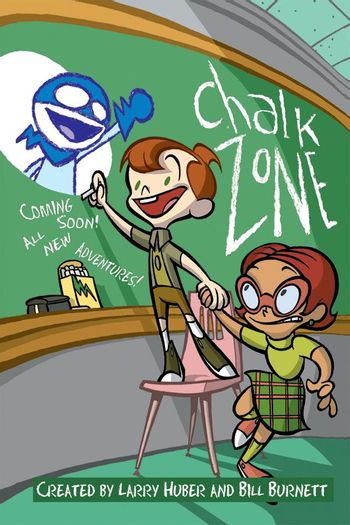 Rudy's got the chalk!
Advertisement:

ChalkZone (1999-2008) is a Nickelodeon cartoon that, like fellow Nicktoon The Fairly Oddparents, began as a series of shorts on Oh Yeah! Cartoons. Despite similarities with a former Pinwheel (now Nickelodeon) cartoon with the same premise, Simon in the Land of Chalk Drawings, creator Bill Burnett has confirmed that ChalkZone is not an considerable spiritual successor.

The show centers on a shy, daydreaming kid by the name of Rudy Tabootie, who one day finds a piece of magic chalk and accidentally discovers a world hidden beyond his teacher's chalkboard as a result. In this world, ChalkZone, chalk drawings that have been erased from all chalkboards live together as now sentient beings; among them is an early creation of Rudy's, a small blue Chalkzoner named Snap.

The original Oh Yeah! Cartoons shorts featured a fairly young Rudy, aged eight years old. The series takes place a few years later, aging Rudy to ten years old and introducing a new female Latina character in Rudy's girlfriend/love interest, Penny Sanchez, who is the only person he trusts with knowledge about ChalkZone. In addition to their usual adventures in the magical world, the trio of Rudy, Snap, and Penny occasionally fight the various threats within a chalk zone, in addition to keeping the place safe from being found out by anyone else.