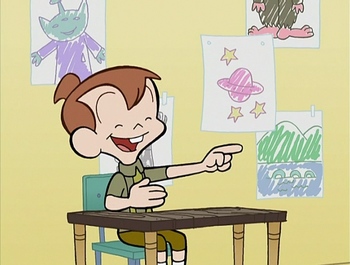 The main protagonist of the show. In the original Oh Yeah! Cartoons shorts, he was eight years old when he first discovered ChalkZone by finding a piece of magic chalk in his classroom. Come the show, he is now ten years old, and continues to have adventures in ChalkZone. 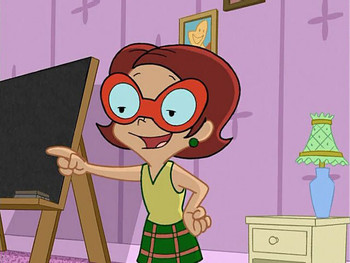 Rudy's friend/love interest. She is a studious ten-year old girl who was introduced to the world of ChalkZone when Reggie Bullnerd erased her scientific formula, and Rudy took her into ChalkZone in an attempt to get it back. Since then, she's often accompanied Rudy on his misadventures. 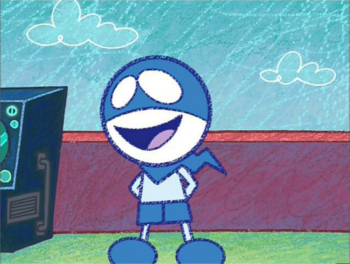 A superhero-like zoner created by Rudy when he was eight years old. When Rudy entered ChalkZone, he discovered Snap and the two have gone on adventures as close friends. There are times when Snap entered the real word, either on purpose, or dragged there by being kidnapped.

The principal of Rudy's school.

Reggie's father. He's the town garbage man as well as the president of the city council.

A newsreporter that first appeared in The Wiggies. She eventually gets wise to ChalkZone and dedicates herself to exposing it.

A greedy business man who discovers ChalkZone after Rudy forgets to close the portal. He wants to create a theme park in that world to get rich.

A teacher with a strong aversion toward the unrealistic and fanciful who tries to indoctrinate kids into only accepting "real" depictions over those that are "unreal".

A comic book artist that Rudy is very fond of. 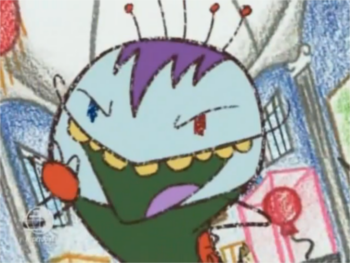 The most recurring antagonist on the show. Skrawl was originally going to be a birthday gift by Rudy to a kid at a birthday party, but Reggie Bullnerd and his friends ruined it, and Rudy erased him into ChalkZone. Ever since then, Skrawl has blamed Rudy for his grotesque appearance, and constantly schemes to bring him down.

Voiced by: Rob Paulsen (Craniac 3, Craniac 4 in Double Trouble, and the Craniac who makes a cameo in Mine Alone), Robert Cait (Craniac 4 in Future Zone)

A race of futuristic robots obsessed with collecting futuristic devices. This includes Rudy's "instant matter materializer", aka his magic chalk.

One of Rudy's oldest chalk drawings. As her name suggests, she's an old woman who spends most of her time in the bathtub.

One of ChalkZone's oldest residents, Rudy, Penny, and Snap needed his help to cure the epidemic of Balloonemia in "The Big Blow-Up". 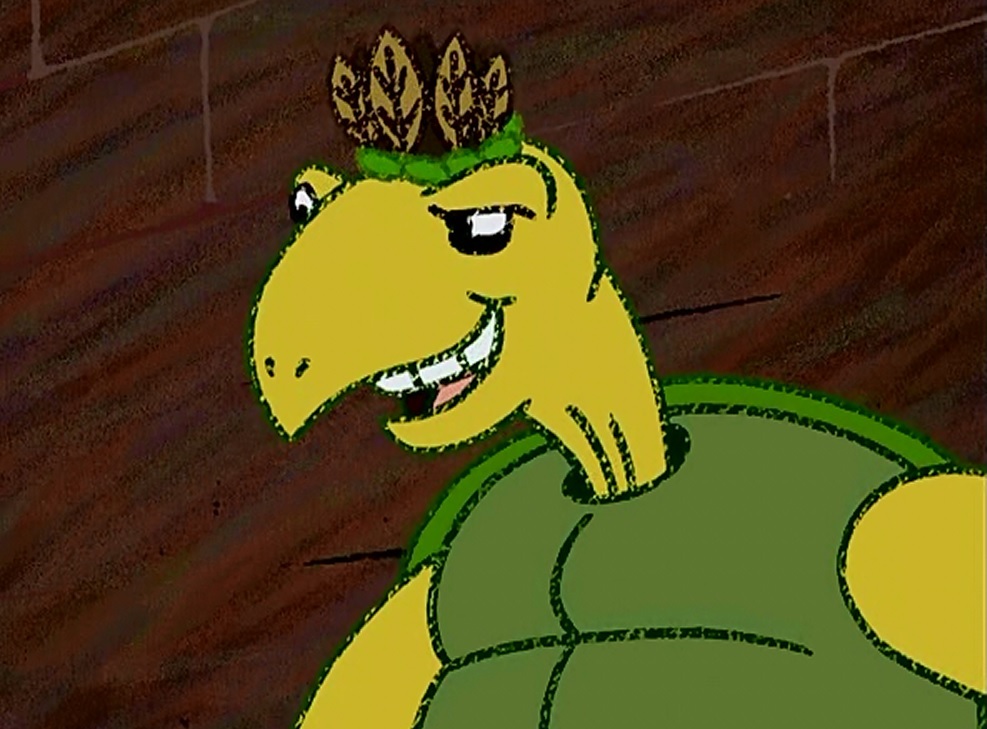 The long-lost king of ChalkZone, who only appeared in the two-part episode "The Big Blow-Up".

A singing skeleton with a pumpkin for a head who appeared in two episodes, on both occasions being angry at Rudy because he thought he stole his bride.

A sentient recycling bin who is very eccentric.

The first drawing by Rudy that became an inhabitant of ChalkZone.

A biker dude with a nasty demeanor.

Chalk drawings of a boy and a girl drawn by Mr. Wilter when he was a kid.

A witch who likes to cause trouble.

Unflattering caricatures of Rudy and Penny that Reggie Bullnerd drew on the chalkboard who came to life in ChalkZone after Mr. Wilter erased them.

A shadowy figure who uses enchanted quicksand to imprison his victims in a nightmare world.

A chalk caricature of Vincent Van Gogh who is very irascible and is often set off by perceived criticism of his work.

A supervillain who frequently clashes with Generic Man.

A walking pile of stone who accompanied Major Brand in her second appearance.

A large yellow yeti initially feared, but later revealed to be misunderstood.

Voiced by: Rob Paulsen and Grey DeLisle (speaking in unison)

A chalk drawing of a rat with a poofy hairdo created by Vinnie Raton and Terry Bouffant in an attempt to get Rudy's magic chalk.