Literature / The Story Of My New House 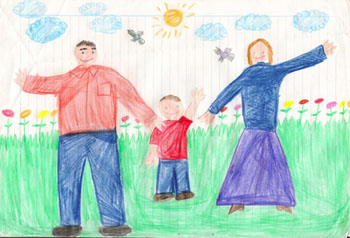 Seems like a sweet and adorable story where nothing can go wrong
My name is Jonathan. I´m seven years old and I live with my mom and my dad.
Jonathan,the main character introducing the readers to the story.

The Story of My New House

Note scroll the sidebar down to the bottom and start at 1 is a Web Original Fiction which narrates a typical horror story about a Haunted House, but telling it from the perspective of a little child named Jonathan, who moves along with his parents to a new house during summer, describing the events with very short texts and colorful drawings. While the story starts in a completely innocent and lighthearted manner (Despite some little hints that imply that not everything is so nice as it seems ), consisting in mere anechdotes from everyday life as the plot advances, things turn incredibly dark, and those colorful drawings slowly become something much more sinister.