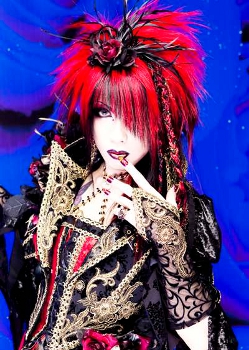 Kisaki is a Japanese Visual Kei Hard Rock / Heavy Metal musician and producer. He has worked with many other Japanese rock bands, including La:Sadie's, Syndrome and Phantasmagoria. As record producer of UNDER CODE PRODUCTION, a sub-label of FREE-WILL, he has produced material for many bands in the VK scene.

While he is known for being a prolific composer and record producer, he has had a tumultuous musical career, marked by numerous unlucky moments and mishaps; after his split with La:Sadie's, he formed numerous musical projects, which gained little mainstream success and suffered disbandments. His label, Under Code Production, was particularly notorious for its similar-sounding and equally short-lived bands, before it went bankrupt in 2013 - leading all of the bands on it to either disband or scramble for new labels.