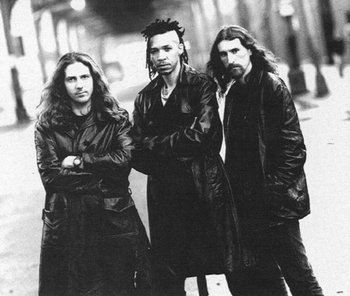 King's X are a Rock Trio consisting of bassist/singer Doug "dUg" Pinnick, guitarist/singer Ty Tabor, and drummer/singer Jerry Gaskill that was founded in 1980 (as The Edge, later Sneak Preview). After a few changes in lineup, band name, and musical style during their early years, as well as now being managed by former ZZ Top video producer Sam Taylor, King's X adopted their trademark sound around 1987 which combined elements of Progressive Metal, dropped D tuning, Beatles-like vocal harmonies and melodies as well as influences from funk, early Heavy Metal and acoustic. Their lyrics mostly dealt with issues of (Christian) faith, spirituality, love, and philosophy. Their early albums "Out of the Silent Planet" (1988), "Gretchen Goes to Nebraska" (1989), "Faith Hope Love" (1990), and "King's X" were initially well-received by the press and created a bit of a buzz among Hard Rock and metal fans, although they failed to make a larger commercial impact than inititally projected. Even though they never openly declared themselves a Christian band they were seen as an example of Christian Rock – an affiliation King's X always denied but that persisted anyway.

In 1993, the band parted ways with Sam Taylor and took a new approach to their fifth studio album "Dogman" which was released in 1994, resulting in a much heavier sound and lyrics reflecting the personal struggles of singer/bassist Pinnick (who among other things had turned away from Christian faith and later came out as being homosexual). Although the record fit in well with the grunge and Alternative Metal wave of the early to mid nineties and secured King's X a slot in the Woodstock 94 festival, the backlash from their now alienated Christian Rock fanbase didn't help with record sales. Although the trio returned to a more polished and radio-friendly sound with their 1996 album "Ear Candy", their lyrical attitude remained focused on loss of faith, relationship problems and dealing with the hardships of life. Following their departure from their previous major label Atlantic Records the three band members released a slew of Solo Side Project as well as three stylistically very diverse albums under the King's X moniker ("Tape Head" from 1998, "Please Come Home...Mr. Bulbous" from 2000, and "Manic Moonlight" from 2001). After another change of record label three more studio albums ("Black Like Sunday" from 2003, "Ogre Tones" from 2005 and "XV" from 2008) as well as a live album ("Live All Over the Place" from 2004) were released. Since then no new King's X album has been recorded or released, although the band continues to be active live and has definitely become a cult act with a dedicated fanbase and many fans among other musicians, arguably making them a No-Hit Wonder.

2018 onward has seen a resurgence of King's X activity, with Doug Pinnick having a biography written about him: Chris Smith's Life Is What You Make It: The Authorized Biography of Doug Pinnick in June. Rock critic Greg Prato released King's X: The Oral History on February 19, 2019 and the band announced the recording of their latest album.