Literature / If This Is a Man 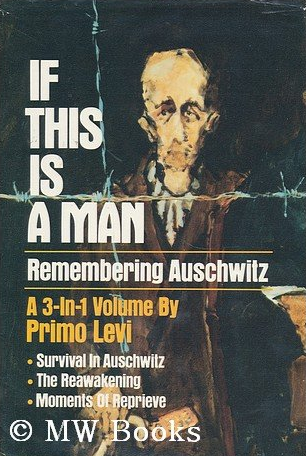 "Consider if this is a man
Who works in the mud,
Who does not know peace,
Who fights for a scrap of bread,
Who dies because of a yes or a no.
Consider if this is a woman
Without hair and without name,
With no more strength to remember,
Her eyes empty and her womb cold
Like a frog in winter."
—Opening poem
Advertisement:

Se questo è un uomo (USA title - Survival in Auschwitz). The first part of the memoir of Primo Levi, an Italian Jew who survived The Holocaust, originally published in 1947, and followed by The Truce, which describes his difficult Homeward Journey.

The short book details the year Levi, who was a member of the Italian anti-Fascist Resistance before his arrest, spent in the Auschwitz concentration camp, from February 1944 until the liberation. Many people draw comparisons with Elie Wiesel's Night, though Levi's book is more straightforwardly autobiographical in nature.

The book was later adapted into a one-man teleplay called Primo, by Antony Sher, which was broadcast on HBO and The BBC.