Music / In Times Before the Light 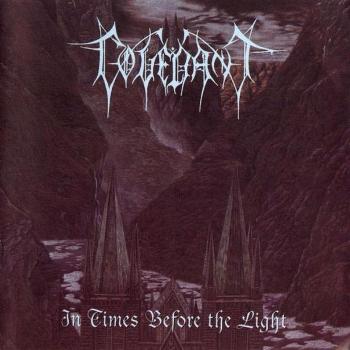 Before the light, or Xtreme Kool Letterz.
Advertisement:

In Times Before the Light is the first album The Kovenant (at that time called Covenant) created back in 1995. The only members at the time were Nagash and Blackheart. The album is considered to be symphonic black metal and provided Covenant a good fan base in Norway. The album was created when Nagash and Blackheart were of young age, at least 17 years old. The release was significantly delayed due to loss of album artwork in shipment to the record company.

A re-recorded version of In Times Before the Light was released in 2002 through Hammerheart Records due to Nagash and Blackheart (now calling themselves 'Lex Icon' and 'Psy Coma') citing that they were not satisfied with the original release. The outcome is significantly different from the original; an industrial version of the original symphonic black metal album. The remixed tracks are longer, various elements were added to them and many parts were re-recorded.

The original album was re-released in 2007 through VME/Head Not Found as In Times Before the Light 1995, with tracks from their 1994 demo From the Storm of Shadows as bonus content. The material was remastered by Tom Kvalsvoll.

The album itself has recurrent themes throughout, making it somewhat of a Concept Album. The lyrics often revolve around war, power-hungry tyrants, dragons and eternal night or winter.

From the Storm of Tropes: