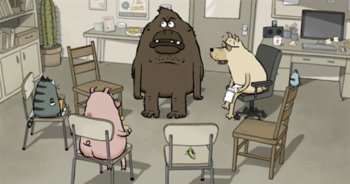 Animal Behaviour is a 2018 animated short film (eight minutes) directed by Alison Snowden and David Fine, produced by the National Film Board of Canada.

Dr. Leonard Clement is a dog who runs a group therapy session. His patients are: Lorraine, a leech with anxiety issues; Cheryl, a self-absorbed praying mantis; Todd, a pig who can't stop eating; Jeffrey, a bird with a dark secret; and Linda, a cat with OCD. Their efforts to work out their problems and neuroses are temporarily disrupted by the new arrival: Victor, a gorilla with an anger management problem. Victor thinks the whole process of therapy is ridiculous and pours scorn on all the rest.

First theatrical short for the spousal team of Snowden and Fine since their 1993 Oscar winner, "Bob's Birthday".