Western Animation / Affairs of the Art 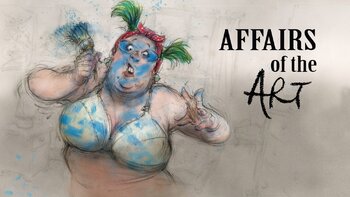 Affairs of the Art is a 2021 short film directed by Joanna Quinn and produced by the National Film Board of Canada.

It's the fourth cartoon from Quinn (and writer Les Mills) to feature an extremely talkative protagonist named Beryl. In this one, Beryl is addressing the camera directly, talking about her family and her life. Beryl, a frustrated artist stuck working in a factory, talks mostly about her weird sister Beverly. When they were children, Beverly had a weird habit of collecting bugs, and then, when the bugs died, burying them in tiny little raisin box coffins. That was just the start of Beverly's oddball habits, though; she tortured her friend's pet mouse by putting the mouse on a toy train and continually crashing the train, she wore earrings made of dead wasps, she got into taxidermy and stuffed the family dog...oh, and also she was fixated on touching her grandma's dead body and dreamed of seeing Lenin in his mausoleum. In general, Beverly is just obsessed with death.

Along the way Beryl talks about her weird grandma who preserved animal body parts and her weird son Colin who is obsessed with screws. She however is not cognizant of her own weirdness.